While some students may advance more quickly, here is the general time frame for IKMA belt ranking advancement: 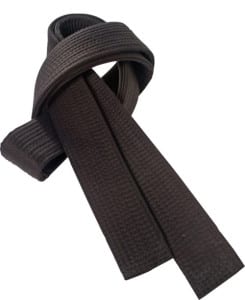 Some additional background information regarding blackbelt requirements might be informative. In 1995, Imi entrusted Grandmaster Haim Gidon with overseeing all black belt examinations. As noted, the IKMA usually requires a minimum of nine to ten concentrated years of study (or more) to test for a 1st dan blackbelt, though, it can be slightly less time if the candidate shows exemplary capabilities and understanding. To date, all blackbelt exams are given and taken in Israel. Three senior blackbelts (3rd dan or higher) usually administer the test for 1st dan.

The IKMA (Gidon System) current blackbelt certification requirements are more extensive and arguably more rigorous than those standards first established by founder Imi Lichtenfeld when he instituted the belt system. (In no way is this observation meant to detract from any instructor who received a blackbelt from Imi Lichtenfeld.) Currently, and, as the system continues to evolve under Grandmaster Gidon, blackbelt examinations involve considerably more material than they did in the 1980’s and 1990’s.

For 1st dan, the IKMA’s current curriculum is seven (single spaced) pages of techniques including 49 specific topics along with the entire curriculum (yellow through brown belts) at the examiners’ respective discretions. All techniques must be performed from both the left an right outlet stances. A candidate must be able defend against all manners of attack from both the right and left sides (i.e. left handed weapon threats and attacks.) Within these topics, there are more than 150 techniques and variations.

For 2nd dan, the curriculum is nine (single spaced) pages and 52 topics. Within these topics are 220 techniques and variations. Stick vs. stick, knife vs. knife, stick vs. knife include Imi’s original defenses along with additional defenses against professionally trained stick and knife fighters. There also specific cold weapon techniques to defend against takedown/groundfighting experts. A minimum of three examiners including a 4th dan and at least two 5th dans (or higher) must be present for a 2nd dan examination.

For 4th dan, the curriculum focuses on advanced military and security applications such as urban warfare along with advanced teaching and instructor development.

For 5th dan, teaching development and mastery are highly emphasized including running instructor courses and advanced belt testing capabilities along with contributions to the system.

Paramount, blackbelts in the IKMA (Gidon System) are based and awarded on skill, technique, and knowledge — capabilities within the system — not “political patronage.”