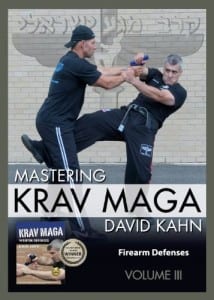 Filmed in HD, many of these latest-evolution techniques and modifications have not been seen outside of Israel. The U.S. military granted David permission to include select training clips.

David received his advanced blackbelt teaching certifications from Grandmaster Gidon, 10th dan. He trains the public, celebrities and federal, state and municipal law enforcement agencies along with the U.S. and British militaries in the Israeli method.

“The Krav Maga I have learned from David Kahn is highly efficient and effective. Whether in the street or in combat, these skills are a force multiplier. I highly recommend the Krav Maga Weapon Defenses DVDs to anyone serious about street survival or hand-to-hand combat.”